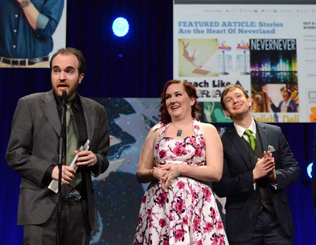 And we’re back. Can you believe it’s been almost three years, guys? Neither can I! And, oh, so much has happened. Let’s start with what I’ve been working on:

Last year, my brother and I helmed a little project called “Enter the Lodge.”  In honor of Laura Palmer’s prophetic message to Dale Cooper in the Black Lodge, “I’ll see you again in 25 years,” and on the 25th anniversary of when the last episode of “Twin Peaks” took place, we staged an unofficial, fan-run third season of “Twin Peaks” entirely on Twitter. All this, of course, before the announcement that “Twin Peaks” would actually be returning to the airwaves for a third and final season, on Showtime. Our version played out in real time over four weeks, spanning 70+ character accounts and more than 5,000 tweets, all told. All written and implemented by just my brother and me, him in Washington D.C. and me in L.A.  It’s one of a series of herculean projects that I obviously was there for, and I still don’t know how we were able to do it.

The reason I decided to do this experiment in Twitter fan fiction was because, while I continue to be incredibly proud of the work we did on “Fury of Solace” (my web series which I expounded on in incredible detail here on this blog until I ran out of things to say about it), it didn’t exactly set the world on fire in terms of views. Not that views are the be all end all, but when you’re helming an interactive transmedia experience like that, you like to know you’re not just shouting into a vacuum. So after I decompressed from the “Fury of Solace” experience, I became inspired by my friend and colleague Jay Bushman’s SXSW Twitter events which he cheekily dubbed SXStarWars. The inaugural SXStarWars in 2009 saw Jay recreate the “New Hope” Death Star trench run entirely on Twitter, engaging Star Wars fans worldwide. While Twitter fiction may not necessarily be transmedia by a technical definition, it falls squarely into the arena of social media storytelling, where I’ve staked some manner of claim in the past 6 years. Since I didn’t have a lot of luck driving traffic to my own original transmedia IP, I thought, “Why don’t I play in an existing sand box?” In “Twin Peaks,” we had multiple generations of rabid fans who’d been in limbo since the series finale’s horrifying cliffhanger some 24 years earlier, who (at the time) never in their wildest dreams believed that they’d get an official follow-up. Ironically, our third season ended on its own horrifying cliffhanger, and now that “Twin Peaks” is officially returning to television, the remainder of our story will likely never see the light of day.

For some years, I’d been kicking around the idea of writing a novelty TV spec for “Twin Peaks,” my version of the first episode of a never-seen third season of “Twin Peaks.” Strictly speaking, TV specs are required to be for shows that are currently on the air, but I thought that maybe someone who was tired of reading their 900th “House” spec might pick up a “Twin Peaks” spec if it came across their desk. Of course, being me, I found a way to make that project infinitely more complex. So much so that I recruited my brother, a “Twin Peaks” fan and talented writer in own right, to help me. I’ll do a deep dive on “Enter the Lodge” in the upcoming posts, but suffice to say, when AV Club’s “Great Job, Internet,” featured us about a week and a half into our run, it was refreshing to know that my days of “shouting into a vacuum” were over.

Hot on the heels of “Enter the Lodge,” I became the transmedia producer for a web series called “The New Adventures of Peter and Wendy,” a modern update of J.M. Barrie’s classic “Peter Pan.” Kyle Walters co-created and stars in “New Peter and Wendy,” and prior to that he’d acted in “Welcome to Sanditon,” the follow-up to “The Lizzie Bennet Diaries,” helmed by the aforementioned Jay Bushman. For “Sanditon,” Jay took the transmedia one step further than he did for “Lizzie Bennet”; he encouraged fans to create Twitter characters of their own, and to become a part of the fictional town of Sanditon, where the series was set. When Kyle decided to create “New Peter and Wendy” with his friend and talented writer Shawn DeLoache, he knew he wanted to incorporate a similar transmedia experience. And when Kyle started looking for someone to run transmedia for “New Peter and Wendy”, Jay kindly recommended me for the job. A job I was only too happy to accept. Earlier this year we took home the International Academy Web Television award for Best Transmedia experience for “New Peter and Wendy” season one, and season two just wrapped up at the beginning of September, 2015. And you better believe “New Peter and Wendy” will get the Coefficient of Fiction treatment as well.

Also this past year, I designed a board game called “Shadow of a Doubt.” It’s still in a very rough prototype stage, and it’s on the shelf for the time being because there’s an awful lot going on at the moment, but it’s been an incredible process. In one of my last entries before this blog’s long hiatus, I hinted at my love of tabletop in a post about “Risk: Legacy,” a game which remains to this day one of my all-time favorite board game experiences. The designer of “Risk: Legacy,” Rob Daviau, has since left Hasbro and started a company of his own, Iron Wall Games. My friends and I have been fortunate enough to playtest his upcoming game “SeaFall,” a wholly original naval exploration game with similar legacy mechanics. I suspect I’ll talk about my game design process, and our SeaFall playtest experience, in the upcoming entries as well.

So stay tuned: After I get back from my speaking tour this October, I’ll begin posting blog entries unpacking all of these projects in much greater detail. Okay, I think that’s a more than ample catch-up post. Thank you all for your patience, and now, without further adieu… on with the show.