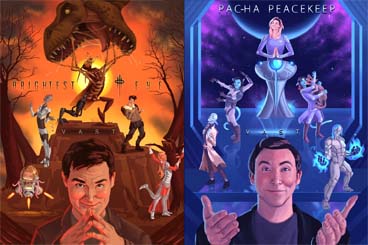 Current and future VASTronauts, I’ve got some exciting news for you: The second season of VAST begins tonight at 7 p.m. PST only on Alpha. If you’re new to VAST and want the full scoop on the show and the community, click through to my VAST Resources post from a while back. Season two still features two ships, one Brightest Eye and one Peacekeep, alternating every week, but the crew rosters have been shaken up a bit! So tune in to Alpha for the first of 13 new episodes, every Monday starting tonight, 4/18.

Equally exciting is the fact that season one is going to be rebroadcast on Geek & Sundry’s Twitch channel at the EXACT SAME TIME, every Monday night at 7 p.m. PST, starting tonight! So if you don’t have an Alpha account yet, but have been wanting to give VAST a look, now you have no excuse not to!

And credit to @LaurenLArtist for the posters in the featured image.