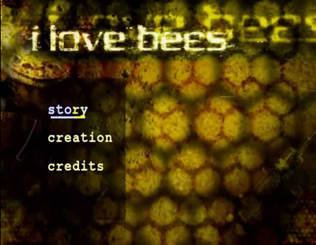 Welcome to part 2 of my StoryWorld 2012 recap.  From here on out, instead of doing this one panel at a time, I’ll be focusing on themes that ran throughout the conference.  This week, we’ll be talking about the future of Alternate Reality Games.

On the Way Forward panel at this year’s StoryWorld conference, some of the biggest names in transmedia storytelling addressed an important question: Has the Alternate Reality Game run is course?  Interestingly enough, the man who was most outspoken in his belief that we’ve reached the twilight of the ARG also happens to be a man who has been intimately involved in the creation of some of the earliest, largest and best-known examples of the form: Fourth Wall Studios’ Elan Lee.  So what soured Lee on the ARG experience?

For one thing, Lee has seen more than his share of players intent on breaking the games he and his team have poured blood, sweat and tears into creating.  As part of the Halo 2 “I Love Bees” experience, players were given clues that turned out to be locations of pay phones all around the world, and times that said phones were going to ring.  Many players were merely treated to automated messages, but a lucky few had the opportunity to speak to real-live actors portraying some of the ARG’s characters.  This proved to be an immensely engaging experience for the thousands of fans who participated, but one thing Lee and his fellow “I Love Bees” developers failed to anticipate was that during one fateful phone call, one of the players would cave and reveal the location of the sleeping princess to the menacing Melissa A.I. that was pursuing her.  This required Lee and his team to jettison several chapters of their planned storyline and engage in draining, last-minute rewrites.  To the players, this development was riveting; to the creators, it was nothing short of a nightmare.  And while, in this case, the player who was the architect of Lee’s woes may not have consciously set out to break the game, time and again Lee has found himself in the unenviable position of having to deal with players trying to do exactly that.  Of course, this begs the question: Why would someone go to such length to derail a game?

On the Painting in the Dark panel, GR Experiential Learning Founder Carl Heath likened gamers to toddlers who don’t know their boundaries.  Indeed, many modern-day video gamers’ natural inclination is to push against a game’s boundaries at the outset, to find out exactly what the game mechanics allow them to do.  And when a game is set in the real world, the line between in-game and out-of-game elements can become blurred so completely as to be almost indistinguishable.  As Sony Computer Entertainment’s Amy Henning keenly observed during the Game Vs. Story panel, “There’s a razor thin line between preserving player agency, thus risking that disruption of the narrative flow, or telling a more linear story that risks showing the puppet strings.”

Lee has walked that line time and again on increasingly ambitious ARG projects, so much so that he seems to think his brand of ARG storytelling has hit a glass ceiling.  That, coupled with a reportedly plummeting ARG audience and the creative frustration that comes from the proliferation of gamers who push the games’ boundaries to the breaking point, has caused Lee to shift gears.  His company Fourth Wall studios has set its sights on telling smaller, more instanced interactive experiences, like their Emmy award winning series “Dirty Work.”

But that kind of instanced interactive storytelling does come with its share of potential pitfalls.  During the Writing Open Story Worlds panel, Blizzard’s James Waugh shared an anecdote that got to the heart of the matter.  There is a playable mission in Blizzard’s flagship Massively Multiplayer Online RPG “World of Warcraft” which calls for the players to slay a dragon called Onyxia.  But when Blizzard established that the character Varian Wrynn struck the killing blow in a storyline in the canonical WoW comics, fans were outraged; Blizzard had inadvertently robbed their players of the roles they’d carved out for themselves in the world of the game.  And as I mentioned in an earlier post, I’d take it one step further to say that during my MMORPG days, the knowledge that thousands of other players were playing through the exact same instanced dungeons that I was playing through created a cognitive dissonance which, for my money, diminished the overall experience.  I don’t want to feel like I’m just a cog in a narrative machine; if I’m taking the time to actively interact with a story, I want to feel like my adventures are my own, and that my actions are imbued with story-world significance, or at least the illusion of it.

Of course, I understand how impractical and fiscally irresponsible it would be to spend hundreds of thousands of dollars on game experiences that only happen once and are tailored to just a few people.  In the case of my transmedia web series “Fury of Solace,” most of the ARGs played out entirely in the digital space, they didn’t cost anything to produce outside of the sweat equity spent drawing them up, so the fact that they were one-off events is a little easier to swallow.  But while I like to think our games were highly engaging for our small but loyal fanbase who experienced them, that is far from a viable model for larger gaming enterprises.

So where does this leave us?  Does increased fan apathy signal that the massively multiplayer ARG is well and truly dead?  Not all of the speakers on the Way Forward panel seemed to think so.  As far as Lucasfilm’s Ivan Askwith is concerned, the audience isn’t burnt out on ARGs in general, they’re simply tired of “engaging in things that have no value to them.”  And Starlight Runner’s Jeff Gomez, for his part, said that taking on a role within the context of a story world is something nearly all of us do in childhood, and he contends that that kind of role playing is something that people want to hold onto.

Part of the reason ARG participation has always catered to a seemingly small percentage of any given franchise’s audience probably has something to do with the fact that this kind of play is actively discouraged in adults, they lack what psychologist Denise Weston on the “Psychology of Games and Gamers” panel referred to as “play permission.”  On the same panel, psychologist and Founder of Transmedia Associates Pamela Rutledge said that the best way to counter these barriers to entry is to make an environment that is rich with safe points of entry.

Which is exactly what Imagineers are currently experimenting with within the confines of Walt Disney theme parks.   Certain park-going families have been given the opportunity to play-test new experiences like “Legend of the Fortuna” and “The Starlite Detective Agency.”  These ARG experiences play out over the course of the family’s visit to the park, and see each of them taking on a role in the story and interacting with actors seeded throughout the park.  During his keynote, Walt Disney Imagineering’s Scott Towbridge related the story of a pair of 7-year-old participants who were astonished that by the end of the day, their initially-skeptical mother had thrown herself completely into her role.  “That’s the first time we’ve ever seen our mom play,” the boys said, when all was said and done.

Does this mean the future of ARGs is in smaller, less expensive interactive experiences in more controlled environments?  That’s certainly a possibility.  But when it comes to corporate, massively multiplayer ARGs, Lee ultimately agreed with his fellow panelists that that kind of storytelling isn’t necessarily dead, so long as it continues to evolve.  In that regard, maybe we’re just waiting for the right creator to take the next giant leap forward.

That’s it for this week! Stay tuned for at least one more StoryWorld recap, and possibly some commentary on Disney’s acquisition of Lucasfilm.