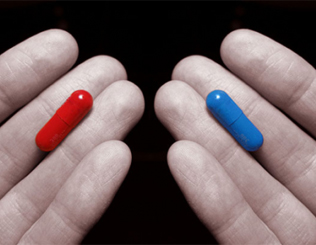 So I’ve been thinking about something Brian Clark said in his keynote at StoryWorld 2012, how oftentimes part of our jobs as narrative designers is to give the audience the illusion of choice, something that’s echoed through a great deal of my own work and other transmedia experiences I’ve seen.  And since Clark so thoroughly covered dead French and German philosophers in his treatise on the phenomenological aspects of the narrative design art movement, I thought I’d throw a dead Russian into the mix.  This illusion of choice reminded me of a fascinating piece I’d read by a Marxist philosopher named Georgi Plehkanov, “The Role of the Individual in History.”  But what does a piece of Marxist propaganda have to do with transmedia storytelling?  As it turns out, quite a bit.

It boils down to this: Plehkanov believed that the larger-than-life figures who are the cornerstones of human history, while possessed of extraordinary abilities to be sure, were merely in the right place at the right time to see their potential realized.  “A great man is great not because his personal qualities give individual features to great historical events, but because he possesses qualities which make him most capable of serving the great social needs of his time,” Plehkanov said.  Plehkanov believed that great men like Napoleon were unwitting thralls to what he called “historical necessity,” and that had Napoleon met an untimely end before he was able to carry out some of his most influential acts, a different but equally capable individual would have necessarily risen to fill the power vacuum left in Napoleon’s wake.  That being the case, Plehkanov did not consider Napoleon to be a hero “in the sense that he [could] stop, or change, the natural course of things, but in the sense that his activities [were] the conscious and free expression of this inevitable and unconscious course.”

Now, whether or not you believe the doctrine of historical necessity applies to events in the real world, it is undeniably the case that many Alternate Reality Games and other transmedia narratives that call for audience engagement have been designed in accordance with Plehkanov’s world view.  The puzzles that underpinned all of the ARGs for my web series “Fury of Solace,” for example, were designed such that only a single individual (or at best a small group) would ultimately fulfill them.  Any one of our viewers had the potential to step up and claim a place in the “Fury of Solace” canon by completing the game and pushing the story forward, but ultimately it didn’t matter which one of our fans that turned out to be, because in the end, the outcome of the game was a pre-scripted, foregone conclusion.  Even in what I’ve been calling “instanced” ARGs, which allow innumerable fans to each play through their own distinct instance of the game in their own time, the narrative designers behind them are creating a role for those fans to step into, allowing the players to fulfill a sort of “narrative necessity.”  In the case of transmedia storytelling, I suppose narrative necessity could be defined as the player agency that must be exercised in order for any given deconstructed narrative to progress.

This seems to be as good a place as any to bring up the concept of emergent behavior.  The propensity for the individual ants in an ant colony to fall into prescribed roles without any kind of centralized decision making has led to ant colonies being categorized as superorganisms, “a collection of agents which can act in concert to produce phenomena governed by the collective.”  Individual ants, in fact, are not designed to live very long on their own, and each of them is to their colony as a single neuron is to our brain.  So a colony of ants is, in a very literal sense, greater than the sum of its parts.

And emergent behavior is certainly not limited to ants, human beings exhibit it as well.  Emergent Groups, for instance (as defined by Robert Stallings and E.L. Quarantelli), are groups of  “private citizens who work together in pursuit of collective goals relevant to actual or potential disasters but whose organization has not yet become institutionalized.”  And even though most of the research on emergent groups is focused on the way in which people organize in response to crisis situations, a lot of the same principles can apply to the way players organize in response to the complex puzzles presented by ARGs.  And what’s more, just like ARG communities, emergent groups tend to form and congregate via social media.

I will likely devote a future post to analyzing the specifics of the overlap between emergent groups and ARG participants, but in general terms, I guess the lesson of today’s post is that narrative designers should be conscious of the roles they’re creating for their audience to inhabit.  People like to feel like they have a purpose, and they’ll probably be a lot more likely to participate in an immersive narrative experience if they’re offered the opportunity to put their own distinctive skill sets to use.  If there is, in fact, a link between people who play ARGs and the kinds of people who participate in emergent groups, maybe specifically facilitating this kind of emergent behavior in the context of a game could make would-be players more willing and able to fill the roles we’ve created, in service of the narrative necessity of our story worlds.