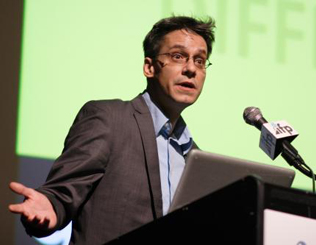 So last week I attended the second annual StoryWorld Conference.  I was unable to attend the inaugural event in San Francisco the year before, but I heard so many glowing reviews that attending the followup was an opportunity I couldn’t pass up.  And I could not have asked for a better experience.  Held at the Loews Hotel here in Hollywood, CA, StoryWorld 2012 was a 3-day romp of invaluable presentations & panel discussions, and elbow-rubbing with some of the brightest minds in the transmedia space from a myriad of disciplines.

I can’t possibly cover StoryWorld 2012 in a single post, so this will be the first of a multi-part series recapping the conference.  And I’ve decided to start my recap with one of the final presentations, by GMD Studios’ Brian Clark.  Clark called his keynote “Phenomenal Work” (as in the phenomenology) and stood on the shoulders of “dead German philosophers” like Immanual Kant, Edmund Husserl and Martin Heidegger to propose that now is the time for enthusiasts of immersive storytelling to spearhead a global design art movement.  Clark suggested that by focusing on the totality of the entertainment experience, transmedia storytellers are venturing into the territory of Husserl’s phenomenology, acknowledging that there is a difference between the story itself and the way fans experience it.

The central narrative of any story only touches on what keynote speaker Damon Lindelof refers to as the “tip of the iceberg” of the story world, everything below the surface is intuited by the audience.  Clark invoked the philosophical term “intentionality” to describe the audience’s ability to project story into the negative space implied by the creators of these immersive story worlds, a capacity that Microsoft Studio’s Lead Narrative Producer Geoffrey Long described in another panel as “negative capability.”  “Our work doesn’t provide the meaning,” Clark said, “it provides a context for it.  The audience provides the rest.”

Clark singled out Shepard Fairey as one of the most successful transmedia creators in the world today.  Fairey’s famous Obey Giant campaign was a self-described experiment in phenomenology.  His stated goal in the Obey Giant manifesto was to “reawaken a sense of wonder” in the world, a basic tenet of phenomenology, and one which Clark argues should be an underlying goal for all transmedia creators.

Clark cited “Mr. Sardonicus,” the world’s first choose-your-own adventure film, as one of the earliest examples of another important tenant of the transmedia movement: Sometimes, interactivity just means providing the illusion of choice.  The director of “Mr. Sardonicus,” William Castle – who by all accounts was a far better marketer than he was a filmmaker – claimed to have shot two endings to the picture, allegedly leaving it to the viewing public to decide to dole out punishment or mercy.  But Castle was such an adept puppet master that not a single audience ever chose to be merciful, and in fact, we now know that that alternate ending was never actually put to film.  Indeed, many ARGs (including those in my transmedia series “Fury of Solace”) are heavily rooted in this idea of the illusion of choice; the outcome of the games are never in question, but the players of an ARG well-told feel as if they are having a direct and measurable impact on the unfolding story.

Next, Clark praised George Lucas, not, in this case, for his success as a world builder but for pushing the film industry forward by championing the THX sound system.  Since transmedia storytelling is about the overall experience, Clark reminded us that “media happens somewhere, and that somewhere can be designed too.”

Because what we do as transmedia storytellers is so rooted in phenomenology, Clark proposed that instead of coining new terms to define our disparate disciplines, we simply preface our existing titles with “phenomenal.”  A phenomenal writer, for instance, is a writer who writes with the totality of the audience experience in mind.

Carrie Cutforth-Young, who I was also fortunate enough to meet at StoryWorld this year, responded to Clark’s keynote on Twitter, suggesting that perhaps the transmedia art movement that Clark proposed had already begun.  Cutforth-Young is one of the organizers of Transmedia101 (formerly Transmedia Toronto), and indeed, there is perhaps no more convincing argument for the existence of this emerging movement than the proliferation of transmedia groups all around the globe.

StoryWorld 2011 featured an unofficial meetup of transmedia meetup groups, and this year the organizers decided to officially incorporate that concept into the program.  Hosted by Transmedia L.A., this year’s Meetup of Meetups boasted representatives from StoryCode, Transmedia101, Transmedia Vancouver, Transmedia SF, Transmedia Europe & Alliance, T Storyteller and the EraTransmedia.  And I’m certain (as Damon Lindelof is so fond of saying) that those are only the tip of the iceberg.  Hal Hefner hosted this year’s meetup, and publicly announced something that I’ve been hinting at on the blog for several weeks: he’s stepping up as new managing director of Transmedia L.A.  And I’m proud to announce that I’ll be playing an important role in the future of the group (more on that in upcoming posts).

Jump on over to Clark’s blog to check out the slide presentation from his keynote, and to keep up with his in-depth exploration of his proposed global design movement.  And stay tuned here for more coverage of this year’s StoryWorld conference!