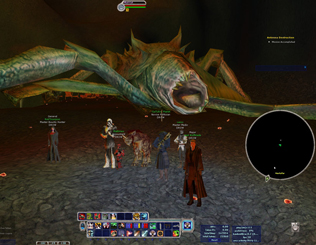 I started dabbling in Massively Multiplayer Online Role-Playing Games as far back as Ultima Online in 1997, but no MMORPG captured my imagination like “Star Wars: Galaxies.”  Admittedly, it was less the gameplay and more the story world that drew me in: I’d been a dyed-in-the-wool Star Wars fan since my parents took me to see “Return of the Jedi” in theaters when I was 3.  I found “Galaxies” so engaging, in fact, that it took me moving to Los Angeles in 2008 to wrest me from the game’s grip, and I have subsequently sworn off MMORPGs altogether, in the name of productivity.  Exactly what kept me coming back hour after hour, day after day, will likely be the subject of a future blog post, but today I’m going to focus on one particular aspect of MMORPGs called “instancing,” because I believe the concept is just as germane to Alternate Reality Games as it is to Online Role-Playing Games.

Periodically, MMORPG designers introduce new play areas, which, due to the proliferation of sword & sorcery games in the genre, are generally referred to as “dungeons.”  These dungeons offer new challenges, new enemies, and generally, new coveted loot drops which players stand to gain by exploring them.  Needless to say, after a new dungeon drops, die-hard and casual gamers alike flock to it in droves, underlining the “massive” in “massively multiplayer.”  This overcrowding can potentially cause any number of problems, from the technical to the practical.  On the technical side, too many players in one place is taxing on the server, and the system you’re playing it on.  On the practical side, forcing all of the players to explore a single dungeon means the new loot drops are likely to be scarce, and die-hard players will tend to have a leg up on casual players when it comes to acquiring them (though this could also be seen as a benefit, if you’re looking for a gaming experience that promotes competition and a player-driven economy motivated by scarcity of resources).  To combat these problems, certain MMORPG developers introduced the concept of an “instanced” dungeon: When a player and his or her party enter the dungeon, they are transported to a newly created instance of the dungeon, identical to the dungeon each of the other players experience, but separate from the virtual world they all share.  In this way, every player is able to experience the content without interference from the rest of the teeming masses, and players of every skill level have the same opportunity to obtain the sought-after loot contained therein.

And many Alternate Reality Game designers have essentially implemented instancing for their gaming experience for similar reasons.  It allows for the highest number of participants, and for players to experience the ARG at their own pace in their own time.  Generally speaking, a fully instanced ARG has to be completely automated and exist only in the virtual space.  You e-mail a character, for example, and receive a canned, pre-scripted, automated response which leads you to the next part of the story, you solve various online puzzles and play through the game to its conclusion.

And while this approach makes a lot of sense from a game-management perspective, I have to admit, canned dungeon content, instanced or otherwise, was my least favorite part of the “Star Wars: Galaxies” experience.  The knowledge that hundreds of thousands of other players completed the exact same missions I did pulled me out of the otherwise dynamic, open world that the designers had created.  Similarly, I tend not to find myself fully engaged in instanced ARGs because, though they may provide the illusion of interactivity, I’m all too aware that ultimately, my actions don’t have any direct, observable impact on the story.

That was our goal for each of the ARGs we staged for the web series “Fury of Solace,” to make fans feel like their actions mattered.  Of course, following this model, our ARGs generally had only one “winner”: however collaborative the process may have been up to that point, it was only one person who would ultimately crack the code, after which further exploration of that particular game became redundant.  So the fact that the ARGs were designed for a small number of players and a short time-span meant that we had to find a way to engage people after the fact, for the benefit of those who were unable to participate at the time, or who hadn’t yet stumbled upon our series.  A way to convey not just the important plot information that came out during the game, but to also immortalize the contributions of the players who did participate (both as a reward to them and as a demonstration that future players, too, could secure themselves an enduring place in the “Fury of Solace” canon).

So when it comes to ARGs, the question becomes: to instance or not to instance?  And ultimately, I tend to think, as with all things, a little instancing is fine in moderation.  (I should point out, it’s been quite difficult to resist the urge to use the phrase “for instance” in this particular post.)  For example (ahem)… When “The Miracle Mile Paradox’s” Rex Higgs went into hiding, and seeded his business cards at local businesses on the strip of L.A.’s Wilshire blvd known as the Miracle Mile, the creative team was able to instance a portion of the game without violating the integrity of the story.  Higgs was trying to recruit as many allies as possible in his struggle against the evil AIC corporation, so it made perfect sense that each player would jump through the same series of automated hoops to get onboard, without the reality-breaking mechanic of having multiple players fill the same role in the same story.  Players were playing themselves, their actions mattered, and because finding the clues actually did require human interaction with employees at the various participating businesses, each player’s individual experience varied.  Obviously, this is an evolving form, and I feel like we’re only just scratching the surface of how engaging ARGs can be.  I, for one, am excited to see where we, as transmedia producers, and the fans who complete the equation, take this form in the days to come.

That’s it for this week, but I hope to see many of you in person at next week’s StoryWorld conference!