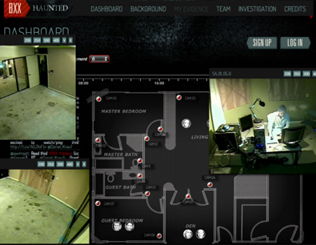 This week, I’m going to talk about another transmedia property I had the privilege to take part in, an experimental web series called “Bxx: Haunted,” helmed by Daniel Knauf, creator of HBO’s “Carnivale.”  For a time, after “Carnivale’s” untimely cancellation, Dan and his son Charlie wrote the “Iron Man” comic for Marvel.  It was because of that (and my three-year stint as a staff writer for Comic Book Resources) that I first became passingly acquainted with the Knaufs.  So when I read about Dan Knauf’s groundbreaking idea for a transmedia web series, I did not hesitate to reach out and offer my services.

In “Bxx: Haunted,” Dan Knauf and his loyal crew set out to tell the story of a paranormal investigation gone wrong.  But their goal was to tell the ENTIRE story.  So they set up 16 cameras in a house in Pasadena, rolled for 32 hours straight, and let their actors eat, breathe and sleep their characters until the story had played out.  There wasn’t a script per se so much as a series of primers, tailored to each character, instructing the actors about their backstory, personalities, and certain key emotional beats they had to hit at specific times, etc. (not unlike what I’m told was provided to the actors in “The Blair Witch Project”).  “Bxx: Haunted” was originally slated to take place over 48 hours, but my understanding is the entire experience became too taxing on the actors involved, so they were forced to move up their timetable on the fly.  Unfortunately, I didn’t become involved with the project until after this insane 32-hour odyssey had already been shot.  I would love to have been present for that part of the undertaking.  Ultimately, all of these hundreds of hours of footage were presented, unedited, on the show’s website in 6 minute intervals.  Viewers could watch as much of the story as they wanted, in whatever order they wanted.  There’s also a way to synch up multiple cameras so you can watch different rooms at once.

My chief task on the project turned out to be working with Dan’s son Charlie to create what Dan affectionately refers to as “ephemera.”  The supposedly haunted house where the story took place had a long fictional history, as did the primary characters in the story, so Charlie and I were tasked to write old newspaper and magazine articles about some of the house’s sordid former occupants, paranormal research papers supposedly written by cast members, police reports, and all manner of supplementary, world-building material.

And while we were in the midst of producing this material, I came up with what I thought was a novel way of presenting the material to the fans.  I’d recently been playing through the Xbox game “Arkham City,” in which fulfilling certain achievements unlocked piece of narrative back story.  It occurred to me that, to encourage exploration through the countless hours of material, this ephemera that Charlie and I were producing might best be made “unlockable,” i.e. watching a particular 6-minute segment of the show from a particular angle would allow a viewer to access a particular piece of supplementary content that was germane to what was happening in that clip.  I figured that would foster fan discussion, and appeal to the completionist tendencies of the video game generation, who would want to unlock all of the supplementary material just to say they did it.  So I was excited when Dan and his team took my advice and implemented that evidence-gathering approach to the supplementary material Charlie and I created.

And for those of you who are a little overwhelmed by the prospect of sifting through hundreds of hours of content, Dan and Co. have edited together a traditional, found-footage feature film out of the project, which is actually a good entre to the world of the series.  You may think that by watching the movie first, knowing the end will spoil the journey, but I would beg to differ.  The film actually works as something of a framing device, and watching the film makes you wonder what happened in the footage the film didn’t show you.  Not only that, the cast is so entrenched in their roles that you almost can’t even call it acting, and watching the way they unravel over 32 hours is a fascinating experience in and of  itself.

I had a blast working with Dan, Charlie and the rest of the cast and crew on “Bxx: Haunted,” and I encourage each and every one of you to head over to their site and check out the project.  I know Dan loves the possibilities that this format presents, and wants to use it to tell other stories.  “Bxx: Haunted” is kind of a dry run for this new type of narrative storytelling, and it’s being shaped by fans like you and me who provide feedback as we delve into this nigh bottomless well of material that Dan and Co. have produced.  Working on the project was a great experience, and I hope I get to work with those folks again in the future.