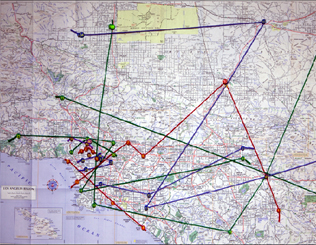 First off, I apologize for not releasing this new entry on Wednesday: That night I appeared on a panel co-sponsored by Social Media Week and the IAWTV called Merging Social Media and Online Storytelling, and that distracted me from releasing our regularly-scheduled blog. For those who want to check it out after the fact, you can watch the entire panel here. All right, now that that’s taken care, let me tell you a bit about the most recent “Fury of Solace” ARG.

During Production for the most recent cycle of the series, we realized we would be filming a lot of vlogs set in Uroboros’ apartment. To spice up the otherwise uninteresting space, we decided to put a map of L.A. on the wall behind him, and in typical conspiracy theorist fashion, adorn it with an increasingly intricate array of push-pins and multi-colored yarn strands over the course of said vlogs. But not content to stop there, we then took a photo of the completed map and used Flash to create an interactive map, allowing viewers to delve into the depths of Uroboros’ insanity and understand how each and every one of those push-pins connects to the unfolding plot.

But I always intended for this map to be more than just an intriguing piece of supplementary ephemera. I figured we could build an ARG around it. The original notion was that we would incorporate geocaching elements, have a secret link on the map which revealed the location of a flash drive that we’d hidden somewhere in real-world Los Angeles. On the drive would presumably be a video of Uroboros, admitting that his conspiracy blog the Flashlight had failed; they’d cried wolf so many times that when they came across an actual conspiracy, no one was willing to listen. But the fugitive Uroboros knew that his days were numbered, and truly believed that someone had to carry on in his footsteps shining a light on the truth, should anything happen to him. So Uroboros had set up a new blogsite called the Lighthouse, and he’d urge whoever found the his message to assume ownership of the site and keep hope alive.

Ultimately, we didn’t have the resources to set up an actual geocaching experience, nor did we have the time to film a final video with Uroboros, so instead, the secret link on the map led to a pdf, a final letter from Uroboros, which conveyed essentially the same information as described above. The only difference was, Uroboros made his would-be successor jump through one final hoop: he’d encoded the password to the Lighthouse wordpress site into the map using a book cipher, so if one of his followers wanted to pick up where Uroboros left off, they’d have to put a little work into it.

Interestingly, the Flash map had a few glitches that needed working out, and it was not in fact ready for release until late Monday night. I didn’t want to post the seeds of this ARG that late, because I knew most people would not be on Twitter at that time of night, but I was backed into a corner, because Uroboros was setting out to crash the Mason International Charity Ball that Monday night where the character was destined to die, and I wanted him to post the map beforehand. I figured I could just have the Fury of Solace Twitter account draw attention to Uroboros’ unusually-scheduled Tweets the next morning. But I failed to take into account that we have an international audience. One of our fans in England was awake and checking Twitter when Uroboros posted the clues that Monday, and by the time I woke up the next day, he had not only found Uroboros’ hidden letter and successfully decoded the WordPress password, he’d actually posted a blog to the site! So we had an in-canon blog that was started by a now-dead character, run entirely by a fan. Exciting stuff! As I understand it, there were quite a few similar instances of blurring the lines between in-canon narrative and fan sites in the grandfather of all transmedia web series, “LonelyGirl15” (which, interestingly enough, counted Maxwell Glick amongst its cast members, the actor who portrays Uroboros).

Uroboros’ secret final message also instructed the fan who found it to alert his former Flashlight collaborators on Twitter that the new conspiracy site the Lighthouse was open for business. Our very game fan did exactly that, and made the character @RealJackBower a co-administrator of the site, so now I, as that character, can use the Lighthouse to further advance the story, but so can our lucky fan in the UK. And by allowing fan contributions, hopefully the Lighthouse can develop the community that the Flashlight lacked.  For a recap of the entire ARG, click here.

These last several posts have been a deluge of information on “Fury of Solace,” I promise we’ve got some upcoming posts on different topics. And I’ll have an announcement to make about an exciting new Transmedia venture very soon. Stay tuned!