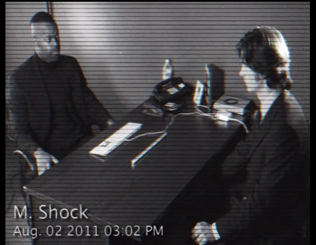 Historically, ARG’s were an important part of how we chose to tell the Fury of Solace story, and I wanted that to continue into our new cycle.  But said new cycle was much more expansive and complicated than anything we’d produced prior, which didn’t leave ample time or resources to mount ARG experiences as ambitious as what we’d tried at San Diego Comic-Con, so I decided to tread on familiar ground by coming up with more Twitter-based ARG’s.  I was keenly aware that not too may people were invested in our new character Uroboros, and that was troubling because the lion’s share of our new cycle was going to be told from his perspective.  Originally, the character of Fury of Solace was supposed to largely ignore Uroboros until the protest in Episode 4.4, but I realized we needed to move up that timetable.  Fury of Solace had thousands of followers and Uroboros only had about 30.  It seemed to me that the best way to draw attention to Uroboros was to have him interact on Twitter with Fury of Solace.  But at the same time, the story required that the two characters not be allies, per se, so I concocted a Twitter ARG that represented a short-term, tentative alliance between Fury of Solace and Uroboros.

In this new version of the timeline, Fury of Solace was paying enough attention to Uroboros to be intrigued when the latter started posting internal Mason International security footage that Uroboros had illicitly acquired by hacking the pharmaceutical company’s mainframe.  As discussed in an earlier post about the Twitter prologue we ran in the lead-up to our new cycle of episodes, Uroboros had hijacked the Mason International Twitter account and seen incriminating Direct Message exchanges between the pharmaceutical company and factions linked to a the mysterious criminal kingpin called King.  But it occurred to me while I was devising the first of our new ARG experiences that there was more to mine from the “Twitter hacking” idea, if I could contrive a reason for the fans to be the ones doing the hacking.

At one point, Uroboros had posted on his blog a crude chart mapping out the various organizations that he believed were shell companies in King’s criminal empire.  Since Uroboros had established a connection between Mason International and King, the other companies in his chart would be the first potential Mason co-conspirators that our anti-heroes would seek out.  So our first order of business was directing Fury of Solace’s Twitter followers back to the graphic, and encouraging them to see if any of those companies had accounts on Twitter.  And of course our fans found some of them, because I’d created the accounts a few days earlier.

Next, we had to find a way for our heroes to hack into one of these accounts, @KonigInc, and contrive a reason that the fans needed to be inextricably involved in the process.  Basically, I knew I needed another party who had inside knowledge of the conspiracy to step forward and offer to divulge Konig Inc.’s password.  I had two options for this: we could either introduce a heretofore unseen whistleblower via a newly created Twitter account, or we could go back to our old staple, the enigmatic prophet Augur.  Augur was intimately involved in Fury of Solace’s origin, and in our first Twitter-based ARG, he posted clues which allowed The Orphan to gain access to one of Fury of Solace’s password-protected videos and thereby save Max Mason’s life.  As a prophet, fans were willing to accept that he had access to knowledge that he wouldn’t otherwise have had.  Ultimately, I decide to go with Augur on this one, mainly because he had a few Twitter followers of his own from earlier in the series, and since this ARG already hinged on the involvement of the new character Uroboros who I knew very few people were following, I thought it would be needlessly confusing to introduce another new Twitter account out of the blue for a one-off whistleblower and expect fans to find that account and play along.  It was easier to go with an established character, which is ultimately what we did.

But the question then became, why can’t Augur just give the password to Fury of Solace or Uroboros?  What possible reason could there be to insert some fan into the process as a middle man?  The conceit I ended up using was this: Augur wanted to give the password to an uninvolved third party, because he feared that whatever incriminating evidence was uncovered would be more easily dismissed if it came from the mouths of two people with outspoken anti-Mason-International agendas.  So Augur Tweeted that the first third party who sent him an @ reply would be given the password.

And not only did one of our loyal fans play along, he even checked the settings for the KonigInc Twitter account and attempted to login to the e-mail address attached to it using the same password.  I’d had the foresight to make the password to the e-mail address different from the Twitter password, but still, I hadn’t necessarily expected anyone to delve that deeply.  Not only that, the same fan wisely pointed out that he could continue to access the account to keep tabs on the supposed Mason International shell company, which made me realize that I could occasionally send more DM’s from the account and see if our loyal fan ever picked up on it.  You can find the recap of this entire ARG here.

Stay tuned for another entry next Wednesday!