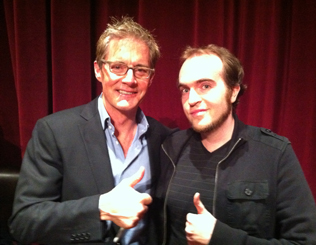 Let me tell you a little about the insane degree of detail to which my brother and I went to craft our Twitter fan-fiction “Enter the Lodge.” For starters, I pored over the series, the prequel film “Fire Walk With Me,” and all of the supplementary material I could find to the point that I became a walking concordance of “Twin Peaks” knowledge.

I had a bit of advanced information about the nature of the never-before-released “Fire Walk With Me” deleted scenes that were slated to appear on the then-upcoming “Twin Peaks” BluRay box set; When the film was shot, they basically filmed David Lynch’s original script word for word, and that script is easily obtainable online. So we were able to authoritatively include some of that material before it would become widely known. For instance (and I’ll try to keep this spoiler free), all of you die-hard fans will remember the final shot of the series, with Cooper staring into a shattered bathroom mirror at the Great Northern Hotel. What most people didn’t know until the release of the BluRay was that “Fire Walk With Me,” though it was 99% a prequel, did include a scant few scenes that actually take place chronologically after the final scene of the show. One of those scenes picks up essentially where the final scene of the series left off. To ease people into our original material, the first two days of “Enter the Lodge” were essentially a Twitter re-creation of the final two episodes of the series. So when we got to the final scene, armed with our knowledge of the “Fire Walk With Me” deleted scenes, we included the full scene, deleted bits and all. At least one of our online write-ups linked to that storify in particular, apparently crediting us with that post-season 2 material which we in fact just lifted from Lynch’s original “Fire Walk With Me” script.

And some of you fans may not realize it, but “Twin Peaks” actually had a select few transmedia components of its own, most notably a book called “The Secret Diary of Laura Palmer” and “An Access Guide to Twin Peaks,” which reads like a truck shop brochure on the fictional town. These were written by actual series writers, so they are, to my mind, at least semi-canonical, and I certainly familiarized myself with that material and referenced it from time to time in “Enter the Lodge.”

While my brother and I were hard at work laying the groundwork for “Enter the Lodge,” USC was holding a “Twin Peaks” retrospective. They screened every episode and “Fire Walk With Me” over a number of months, and each session was followed by a panel discussion with members of the cast and crew. Unfortunately, I didn’t learn about this until it was well into its run, but I was fortunate enough to attend two of these sessions, where I briefly met Kyle MacLaughlin, among others (see featured image above). And I have to tell you, that night I encountered a “Twin Peaks” fan that put even me to shame. This “Twin Peaks” super fan asked a question of one of the series directors about second-unit footage that had been shot for one of her episodes that she didn’t even know existed, footage which obviously never made it to air. In particular, it was a scene including James Hurley’s mother, who was occasionally referred to but never actually seen in the series. But they had, according to the super fan, in fact cast and shot a scene with Colleen Hurley, played by a little-known actress named Linda Carlson. So of course, I went home and did a little research, discovering that Carlson’s biggest screen credit aside from this was “Nosey Neighbor” in “Honey I Blew Up The Kids.” So I managed to find a grainy still of her from that film, which we wound up using as the Twitter photo for our Colleen Hurley account. We also found a transcript of that still-never-released scene, and incorporated some of that material into our characterization of James’ mother.

Now, you die-hard fans will certainly also remember one of the series finale’s other cliffhanger moments, in which the Twin Peaks Savings and Loan explodes with a few beloved characters inside. Just before the explosion, a security guard, who only appears in the far background of a couple of shots, takes a phone call. He shouts repeatedly into the phone, “It’s a boy! It’s a boy!” just before the bomb in the vault goes off. It plainly sounded like he was triumphantly celebrating the sex of an as-yet-unborn baby. The only baby in the series that fit the bill was the one gestating in the womb of Lucy Moran, who had resolved to raise the child with her on-again off-again beau, Deputy Andy Brennan. So we got it in our heads that the security guard at the bank was one of Andy’s brothers, who’d just been alerted via telephone about the sex of his future nephew. The series had established that Andy had many siblings, though we never saw any of them, and it amused my brother and I to think that all of the Brennan children had gone into some branch of law enforcement. So we looked up the actor who played the guard, whose name I won’t mention here, but it’s easy enough to find if you have a mind to track it down. His primary claim to fame was that he played a handful of different aliens on episodes of “Star Trek: The Next Generation.” So, we of course created a Twitter account for bank security guard Tommy Brennan, and in a moment of extreme synchronicity, I managed to find a photo of the actor in question wearing a security guard uniform. Which of course promptly became that character’s profile pic. As you might expect, many of these details I’m telling you now were noticed by exactly no one. Except perhaps by our friend the super fan.

We also had a number of cross-over name drops which went largely unnoticed. One of my favorites was Walter Bishop from “Fringe.” In throw-away scene in one episode of “Fringe,” Walter is wearing a pair of glasses with one blue lens and one red one, which he says he’d been given by his friend Dr. Jacoby from Washington State. Of course, Dr. Jacoby is the name of Laura Palmer’s creepy psychologist who famously wore a remarkably similar pair of multi-colored glasses on “Twin Peaks.” Interestingly, the events in “Enter the Lodge” take place in 1989, about a year before the lab fire in the “Fringe” timeline that would see Walter Bishop committed to a mental hospital. So we actually had a young Walter Bishop Twitter account which was friends with Dr. Jacoby, but we never did anything with it, so that’s a little Easter Egg which, to my knowledge, no one ever discovered.

When I spoke to transmedia producer Jay Bushman about “Enter the Lodge” while it was still in the planning stages and mentioned the “Fringe” connection, it made him think of the medical drama “St. Elsewhere.” That series famously ended with a scene which suggested that the entirety of the series existed only in the head of an autistic child named Tommy Westphall. Characters from “St. Elsewhere” appeared in many different television series, leading comic book writer Dwayne McDuffie to posit the existence of a Tommy Westphall Universe, in which many beloved television series co-exist, and which may all, in fact, be in Tommy Westphall’s head. So while I was peppering Easter Eggs into “Enter the Lodge,” I wanted to try and find a way to include a “St. Elsewhere” reference. And the synchronicity of the connection I found still kind of makes my head spin. In another of “Twin Peaks’” innumerable cliffhangers, Ben Horne falls and sustains a nasty head wound. The series had already established that the Twin Peaks hospital was too backwater to have an MRI, so my brother and I resolved that Ben Horne would have to be sent to a bigger hospital in Seattle to get a brain scan. Now, what does all of this have to do with “St. Elsewhere”? Well, “St. Elsewhere” took place in Boston, but as fate would have it, in the final episode of the series, David Morse’s character Jack “Boomer” Morrison (full name John Steinbeck Morrison) left Boston to be with his girlfriend Joanne; In Seattle, Washington. And the “St. Elsewhere” finale aired in 1988, which means Dr. Jack Morrison would get to Seattle in plenty of time to treat head trauma patient Benjamin Horne when he is admitted to University of Washington Medical Center in mid 1989.

We name-dropped Reginald “Reggie” Purdue, Fox Mulder’s FBI training officer in “The X-Files.” “Fringe” once referred to an “X-division,” suggesting to some fans that “Fringe” and “X-Files” took place in the same universe, so it seemed that “X-Files” could also co-exist with “Twin Peaks” by association. A member of the Air Force’s project Blue Book mentions in passing “the Carcosa incident,” a reference to the first season of “True Detective” in particular, but one which actually dates back to “The King in Yellow” stories by horror authors Robert W. Chambers and later H.P. Lovecraft.

And these aren’t Easter Eggs, per se, but we did introduce a handful of new characters for our third season of “Twin Peaks,” and cast them with contemporary 1989 actors who we imagined might have appeared in a third season of the show if not for its untimely cancellation. These included Jonathan Banks, Michael Biehn, Keith David, Louise Fletcher, Scott Glenn, Teri Hatcher and Terry O’Quinn.

And that would be all of the Easter Egg material that comes to mind. Hope you’ve enjoyed this example of my unnecessarily and unreasonably in-depth research process. Next week, I’ll be discussing the ways in which fictional character social media accounts don’t always need to function in precisely the same way as real-world Twitter accounts. Stay tuned!