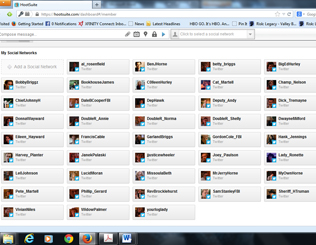 Those of you who are familiar with “Twin Peaks” know just how large the ensemble cast became by the end of its second and final season back in 1990. Which meant that when my brother and I embarked on the experiment in Twitter fiction that we called “Enter the Lodge,” creating the 70+ Twitter accounts proved to be a herculean task in and of itself.

I am incredibly lucky that I created the lion’s share of those accounts before Twitter instituted a much more stringent screening process for new accounts. I had a rash of latter-day “Enter the Lodge” accounts and “New Peter and Wendy” accounts get permanently suspended, presumably because some of those accounts read like spam. Ironically, to continue telling stories on Twitter, I had to become a better spammer: I had to make accounts that looked like they belonged to real people at first blush, enough to fool the person whose job it is to verify new accounts. Fortunately, I’ve discovered that once a Twitter employee gives an account their stamp of approval, they never look at it again. So after an account got past those gatekeepers, I’d overhaul it to be whatever fictional character I needed. Worth noting for you transmedia fans who want to play in a roleplay sandbox like we’ve created for “New Peter and Wendy,” simply indicating in your account description that this is a “RP” or “roleplay” account tends to spare you those headaches.

And just as a word of warning, when a Twitter account does get suspended, that unique Twitter handle will remain in limbo forever, unless you’re able to appeal the suspension. So if you have your heart set on certain Twitter handles for your characters, and you’re at all concerned about the possibility of some of your character accounts being suspended, I’d suggest using placeholder handles at first; it’s easy enough to change them at any point in the future.

Now, every Twitter account has to be attached to a unique e-mail address, which means if you’re planning on embarking on a project the size of “Enter the Lodge,” you’re going to be creating a lot of e-mail addresses. Many e-mail services require a phone number when you sign up for a new e-mail address, and I know from experience that Gmail only allows you to attach so many Gmail addresses to a single phone number. So for most of my recent Twitter fiction projects, I’ve used hotmail/outlook e-mail addresses; there’s a field for phone number when you sign up for the account, but filling out that field is optional. Now, there’s one caveat to this that may save you some headache: I haven’t tried this personally, but my understanding is that Twitter reads different Gmail aliases as distinct, separate e-mail addresses. This means that, potentially, you only need to create one Gmail address for a given project, and then just create a unique alias for each account you need.

There were a number of other technical limitations that my brother and I had to overcome in bringing “Enter the Lodge” to fruition. First off, we knew we weren’t going to be able to manually post those tweets in real time; for 70 accounts, that would take a small army. This meant that all 5,000-odd tweets of this Twitter story had to be pre-scheduled so they could post automatically at the proper times. In some ways, this is not ideal, because while there are plenty of services which allow you to schedule tweets, none of them enable you to schedule a reply to a tweet that doesn’t yet exist. This meant that the Twitter conversations in “Enter the Lodge” would not be threaded the way that your typical Twitter interactions are. Still, this was a necessary evil for a project as massive as this.

The first platform I explored for scheduling was Hootsuite, and there were a few reasons why this proved ineffective for our purposes. For one thing, the Hootsuite pro monthly membership only allows you 50 different social accounts. I know that sounds like a lot, but obviously that was not going to be sufficient for this project. You could pay an additional monthly fee to add more accounts, but as this was a no-budget affair, that was going to be cost prohibitive. Additionally, Hootsuite only allows you to schedule a tweet every five minutes. I’ll delve into this in more detail in another post, but for “Enter the Lodge,” we weren’t pretending that these accounts were actual Twitter accounts. Our story picks up in 1989 when “Twin Peaks” left off, and obviously Twitter did not exist yet at that time. Twitter was basically just the medium through which we told the story. It might be helpful to imagine that my brother and I wrote a massive, 5,000 line screenplay, and that all of the characters’ lines were delivered by their Twitter accounts. Since we weren’t constrained by the brevity which characterizes most real-world Twitter conversations, some of our scenes were 40, 50, 60 lines long. If the component tweets for a scene like that were scheduled in five-minute intervals, that scene could take the better part of a day to play out. This, clearly, was not going to be acceptable. That said, I actually did use Hootsuite for “Enter the Lodge”; while it didn’t work for our scheduling, it was much better for monitoring the accounts and engaging with the fans in real time.

Ultimately, my brother and I settled on SocialOomph to do our “Enter the Lodge” scheduling. A pro account with them allowed you unlimited social accounts, and let you to schedule tweets once a minute, which was a lot more tenable for our purposes. But even once we’d found scheduling software that met our needs, actually scheduling the content still proved to be incredibly laborious. Basically, my brother and I scripted the tweets in an excel spreadsheet in chronological order, then I came up with a formula that converted those tweets into the precise format that was required for SocialOomph uploads. Then I had to sort those tweets by character, create a text file for each character, and upload each of those individually. This wouldn’t necessarily have been so bad if we’d scripted the entire four weeks before “Enter the Lodge” starting airing, but in fact, we were only a week ahead of the game at any point in time. So we wrote the first week of tweets in advance, uploaded the 70-odd text files for week 1. Then while week 1 was happening, on top of making sure it played out smoothly, we had to finish the script for the second week and upload those files, on and on until our story was finally finished.

Interestingly, none of the scheduling options I explored allowed you to schedule straight-up @replies. I suppose that is, again, part of a concerted effort by Twitter to prevent spamming. You could get around this by putting a period or some other character before the @ symbol, which was absolutely a compromise we were willing to make. But a couple of days into “Enter the Lodge” we hit something of a snag in this regard. The Twitter API started bouncing back random tweets, essentially telling us that we were sending too many @ messages in too quick a succession. Obviously, this wasn’t going to work for us; we couldn’t have random lines of scenes disappearing into the ether. So we had to do a frantic overhaul of the way in which we delivered this content.

We were, of course, using the ever-amazing Storify to archive these Twitter scenes on a daily basis. So even though we were committed to having the story play out in real time, we had to come to grips with the fact that this was being created more for the archive collection than it was for fans watching in real time. We, essentially, removed the @ symbol from the majority of our tweets. We’d really only use it when a character started talking to another character, and we let people assume that subsequent tweets were addressed to the same person, until we included another @ message to indicate that the character had started addressing someone else. So, honestly, I don’t envy the people who actually followed all 70 accounts in real time; for four weeks, your Twitter feed would have been littered with tweets from Dale Cooper and company basically once a minute, and it wouldn’t even be clear in the context of your feed who was talking to who. We basically encouraged people to follow the story by either subscribing to the Twitter list (which included all of the characters), or to simply keep up with it on our website, where we had a separate storify for each scene, sortable by day and character.

As long as we’re talking about technological limitations, we did create a few dozen fake Foursquare check-in locations for fictional places in Twin Peaks, where the characters would routinely check in. It was simple enough for us to use the web version of Foursquare to check into these non-existent places, but there was really no way I found to automate the process. So my brother and I had to do those check-ins daily, in advance of the scenes to which they corresponded. It may have ultimately been a needless expenditure of energy, given that we titled each storify scene as a screenplay slugline that included the location, date and time where the scene was taking place, but it probably helped orient the people who did consume it in real time. I haven’t attempted to create fake check-ins since the check-in functionality of Foursquare has been ported over to Swarm, but I suspect the process is probably very similar.

So needless to say, we learned quite a lot from this experience. And when I got to “New Peter and Wendy,” which had maybe a dozen character accounts, in some ways that felt like a vacation! Stay tuned for next week’s entry, in which I delve into all of the Easter Eggs in “Enter the Lodge.”