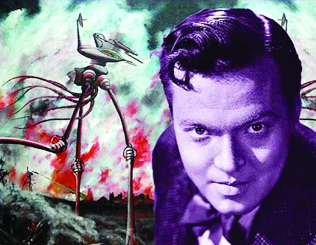 In the film “The Man Who Knew Too Little,” Bill Murray’s character, Wallace Richie, visits his brother in London where he’s signed up for an avant garde experience called the Theater of Life.  Essentially, the Theater of Life is a Live Action Role Playing experience, in which you, the client, pay for the privilege of playing a character against a bevy of actors throughout the city who adlib their way through a narrative that’s scripted to them but new to you.  Of course, Bill Murray’s Richie, who believes he’s engaged in an entirely fictional theater experience, winds up stumbling into a real-life conspiracy of industrial espionage, blissfully ignorant of the fact that the ensuing farce is actually a matter of life and death for Richie himself and the other parties involved.  But in a world where Alternate Reality Games set out to blur the line between fiction and reality, this scenario may not be as farfetched as it sounds.

Of course, storytellers had been blending fiction and reality for years before transmedia was even a concept.  In 1938, the now-infamous radio adaptation of H.G. Wells’ novel “The War of the Worlds” sent listeners into a panic when they failed to notice the numerous disclaimers that the faux-news broadcast of an extraterrestrial invasion was, in fact, a work of fiction.  Now, in contemporary society, it seems safe to assume that the internet and real-time social media platforms like Twitter would prevent something as unambiguously fictitious as “War of the Worlds” from entering the public consciousness as a real event.  But this didn’t stop Boston citizens and law enforcement from mistaking guerilla marketing devices for the 2007 “Aqua Teen Hunger Force” film for improvised explosives, despite the fact that the devices in question were little more than glorified Lite-Brites.

And even allowing for the possibility that players are fully aware that an ARG is 100% fictitious, introducing time limits with measurable consequences for failure could result in real-life health hazards.  Frankly, anytime you task someone to get to a specific place within a constrained time period, risk becomes an inexplicable part of the equation.  For more than 10 years, Domino’s Pizza ran a promotion guaranteeing that your pizza would be delivered in 30 minutes or less, or you would receive the pie free of charge.  But unbeknownst to their customers, the cost of those free pies came out of the paychecks of the hapless delivery people who failed to deliver said pizzas on time.  Needless to say, most Domino’s employees couldn’t afford to eat the cost of a pizza or three, so they found themselves in the unenviable position of doing anything and everything they could to ensure that they made it to their customers’ homes before the 30-minute deadline.  And if these extreme measures included breaking the established speed limit, so be it.  Not surprisingly, this policy resulted in several documented auto-accident related fatalities attributed to “reckless” Domino’s drivers, and after the ensuing lawsuits were settled, Domino’s finally discontinued the promotion in 1993.  And occasionally, this disregard for one’s own safety has manifested during Alternate Reality Games as well.  During the “I Love Bees” ARG for Halo 2, players were tasked with taking calls at certain payphones at prescribed times.  And one ardent player in Florida actually braved Hurricane Frances to take just such a call.  This die-hard fan emerged from the experience none the worse for wear, but things could have ended very differently.

And that’s not the only potentially dangerous situation that “I Love Bees” puppet master Elan Lee has seen result from an ARG he was helming.  As we’ve discussed previously, modern gamers have a tendency to push the boundaries of the games they’re playing, and during the Painting in the Dark panel at StoryWorld 2012, Lee recounted a story from AI’s “The Beast” ARG in which a few players in Chicago pushed the boundaries a little too far.  After going to a bar where embedded actors played out a murder mystery, these players followed the actor who played the murder victim all the way back to his real-world home, where they were ultimately arrested by honest-to-God cops.  And while the players surely harbored no ill intent towards the actor in question, Lee observed that, like Live Action Role Playing, sometimes ARGs need safe words too.

During his panel at StoryWorld, “Lost’s” Damon Lindelof recounted a story from his childhood, when his parents took him to a Six Flags stunt show.  When a man in the crowd, who was seemingly unrelated to the stunt team, volunteered to dive off the high board that even the trained professionals refused to brave, a young Lindelof watched in awe.  It wasn’t until later that his parents explained that everything they’d seen had been part of the show.  And young Lindelof was so duly impressed by the deception that he declared, “When I grow up, I wanna be the world’s greatest schill.”  As far as Lindelof is concerned, there is a hucksterism inherent to his job, and nowhere is that more prevalent than in the design and implementation of ARGs.  At Comic-Con in 2006, Lindelof put his inner-schill to work by staging a confrontation between himself and a woman calling herself Rachel Blake.  Some of the more casual “Lost” fans were probably left scratching their heads, but die-hard fans recognized Blake’s name from the “Lost Experience” ARG; they were seeing a character from the game come to life.  Though we can look back as far as pioneers like Andy Kaufman for examples of creators breathing life into fictional characters and refusing to let fans in on the joke, new media technologies have enabled this kind of hucksterism to soar to new heights.  “LonelyGirl15,” one of the earliest vlog-based web series, made every attempt to convince their viewers that the titular lonely girl was a real person, and for a long time they succeeded.

Now, I’m not saying any of these creators were deliberately trying to perpetuate hoaxes, they were really in the business of telling stories.  That said, a lot of these same tools could potentially be subverted to any number of nefarious purposes.  On the Way Forward panel at this year’s StoryWorld, after Flint Dille announced that he was working on a project with DARPA, Jeff Gomez admitted that he’d turned down the DARPA gig precisely because he feared the possibility that this kind of transmedia storytelling might be, for lack of a better term, weaponized.  Dille assured Gomez and the crowd that there was nothing untoward about the work he was doing for DARPA, and I tend to believe him, but the fact of the matter is, there’s a reason why ARG creators are commonly called puppet masters; A fundamental part of most ARGs is manipulating people into doing what you want them to do.  Of course, when we’re talking about transmedia properties in the entertainment world, hopefully the worst that those experience designers can be accused of is trying to sell you on a product or a brand.  But many transmedia storytellers have posited that there is another “War of the Worlds” out there, and the mobilizational power of that kind of carefully-constructed fantasy could certainly be a powerful weapon if put into the wrong hands.

Now, I mention these cautionary tales not as indictments of transmedia creators and their work.  For my money, the illusion of reality in well-designed ARGs is one of the most intriguing and engaging elements of the transmedia storytelling phenomenon, and continuing to blur that line between fiction and reality is something that I am constantly exploring in my own transmedia work.  But I figured I’d devote this one blog post, at least, to reminding all of us all of the great power we transmedia puppet masters wield, and the great responsibility that comes with it.