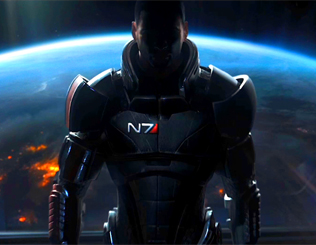 Historically, TV formats like procedurals and sitcoms have been among the most popular television programming.  Shows that promote a kind of escapism, which, each and every episode, culminates in a mind-numbing return to the show’s status quo.  As you might already be able to tell, this kind of storytelling has never really appealed to me.  Truly serialized television storytelling is a relatively recent phenomenon, and was a revelation for people like me who are looking for immersion, for that extra level of engagement, a legacy of character and a legacy of story.  Likewise, for the longest time, games had very little inherent story outside of what we, the players, brought to the experience, and each game was, by definition, self-contained.  But in recent years, all of that has begun to change.

As I’ve told people time and again, when it comes to legacy of player agency, no video game has spoiled me more than Mass Effect franchise.  At the start of each new game in the trilogy, you were able to import your character from the previous game.  This import retained not only your character’s physical attributes, but also the important decisions you made as that character in the previous games, which would have a direct impact on how the subsequent games played out.  We’ve been talking a lot on the blog about the benefits of giving players’ actions the illusion of story-world significance, and with the Mass Effect series, Bioware has done this more successfully than perhaps any game franchise I’ve ever played, and they did it by giving my actions an enduring legacy from one game to the next.

Remarkably, even board games are getting into the act.  My friends and I are long-time Risk fanatics, and back in high school, we were inventing new rules for classic Risk long before Hasbro started expanding on the original concept themselves with spinoffs like Risk 2210 and Risk Godstorm.  Given that, and our proclivity for serialized gaming in general, it should come as no surprise just how much my friends and I geeked out when we learned of the existence of Risk: Legacy.  In this game, you play a series of 15 games with the same players on the same board, and the outcome of each game has an impact on the face the world and the rules themselves.  And you aren’t playing as some non-specific regime fighting for world domination, you’re one of five distinct factions, each with their own unique powers.  The official rules of the game call for players to draft factions at the start of each game, so you aren’t necessarily playing the same faction from one game to the next, but on our board, we did things a little differently.  After randomly determining who would play which faction at the start of game 1, we decided to set those decisions in stone: each player played the same factions for the entire 15 games.  This resulted in an even more visceral history for our world, and a bizarre sort of nationalism that manifested in the in-character e-mails we started exchanging in between game sessions.

But what is so attractive about the idea of legacy in gaming?  For starters, there can be very functional, practical benefits, like the age-old gaming convention of leveling up.  Leveling up is a tried-and-true staple of many video games, but it also dates back to pen-and-paper RPG’s like D&D.  These games become about more than simply enjoying the experience for the experience’s sake, because the act of playing has a concrete, measurable reward system: leveling up (and learning new skills as a result) provides players with not only a seemingly limitless variety of gameplay, but also a sense of pride in having reached these gameplay milestones.  This was certainly the case in Risk: Legacy, where every win you accumulate earned you permanent upgrades that enriched the gameplay experience and promised to make your road to global domination that much easier in subsequent games.  And in an immersive game like Mass Effect, the rewards for extended play are not limited to functional level-ups; players can also earn emotional payoffs by seeing the eventual impact that their decisions have on the world of the story.

And interestingly enough, when a series is rooted in giving players’ actions the illusion of story-world significance, any diminution of this player agency can be a deal breaker.  As anyone who follows the Mass Effect series knows, there was a great deal of fan controversy surrounding the culmination of the trilogy.  Now, there were plenty of people who disliked the ending of Mass Effect 3 purely for story reasons, and others who nitpicked lapses in logic in the game’s final sequences, but as far as I’m concerned, the main problem with the end of the series boils down to this: in a game that was built around infusing players’ choices with story-world significance, the final choice we were given amounted to no choice at all.  In the final moments of game 3, your Commander Shepard is presented with three choices, three ways to defeat the Reaper menace that has plagued the galaxy from the start of the series.  But regardless of which option you pick, the three endings of the game are virtually identical.  In response to almost unanimous fan outrage, Bioware eventually released a free, downloadable extended ending, and while this afforded them the opportunity to address story concerns like the lack of an epilogue and the plot holes that mired the final sequences, without rewriting the ending entirely, this kind of workaround simply was never going to be able to address the endemic problem of markedly diminished player agency.

So how does all of this apply to transmedia storytelling?  In general, it seems to me that the kind of fan who enjoys the enduring legacy in serialized storytelling is the same kind of fan who will be most engaged in immersive transmedia experiences.  The kind of fan who is inclined to pore over every frame of every episode of their favorite TV shows, backwards and forwards, is probably also the kind of fan who is going to follow every character from their favorite series on Twitter, and dive down the rabbit hole of a corresponding transmedia experience as far as they are able to go.  And legacy, as far as transmedia experiences go, I think comes back to that illusion of story-world significance.  Just as it’s far easier to get invested in a traditional media story world that changes and grows dynamically over time, I firmly believe that a trasmedia experience that encourages player agency will be far more successful and fulfilling if the interactivity is more than just a novelty, more than just a choose-your-own-adventure style choice between a couple of canned alternatives.  In this case, we’re not just talking about the legacy of stories and characters that exist remotely across the great divide between you, the fan, and the storyteller, we’re talking about the enduring legacy of your actions as a character in that story.  And what could be more engaging than that?