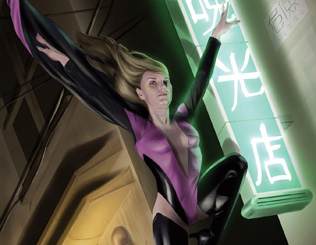 The first episode of my web series “Fury of Solace” was release in October of 2008, and our first Twitter-based ARG (chronicled in the last post) went live in early July, 2009.  And the proximity to Comic-Con was not an accident.  Our first, purely virtual ARG was such a success that come Comic-Con, we were going to kick it up a notch and organize our first real-world ARG.  Obviously, this was logistically a little more difficult.

The conceit of the event was that Mason International had a booth at Comic-Con, and according to Fury of Solace, the pharmaceutical company’s true purpose in attending the convention was to recruit real-life superheroes to keep their CEO safe from Fury of Solace.  So Solace tracked Mason to San Diego, intent on thwarting the CEO’s plans.  And fans of the series attending the convention were going to get a chance to help him.  We staged the ARG on Saturday, July 25th, and after establishing the setup, Fury of Solace tweeted that Max Mason was staying at the San Diego Omni.  Solace himself would have investigated the lead, but he was pinned down by the cops in another part of San Diego, so he enlisted the aid of his followers, asking them to pay a visit to the lobby of the Omni hotel and see if there were any messages for Max Mason.  Of course, there was a message for Max Mason, because we had left one: the message said that a woman named Sara Ward would meet Mason for dinner at a seafood restaurant across from the San Diego convention center.  At the risk of giving a very minor spoiler, Sara Ward is a character who will be important in “Fury of Solace” further down the line.  That night, we made a reservation for two at the seafood restaurant in question, and posted the actress who plays Sara Ward there on the patio, supposedly waiting for her dinner date, Max Mason, to show up.  After learning Mason’s plans thanks to the help of his followers, Fury of Solace arrived at the restaurant and accosted Ms. Ward, convinced that she was the frontrunner for the Mason International superhero bodyguard position.   We had friends of ours film the entire encounter on their flip phones, culminating in a chase through downtown San Diego, and edited it all together to make it look like found-footage shot by actual witnesses.

Ultimately, this first real-world ARG was also a success, and many of our fans who were unable to attend Comic-Con that year wished they’d been able to participate.  And this brings me to another important aspect of the way I try to handle these ARG’s: chronicling them for posterity.  I didn’t want our “Fury of Solace” ARG events to just be flashes in the pan, one-off events that you only knew about if you happened to be paying attention at the time.  I wanted to find a way to record them for posterity, so future fans who were so inclined could follow those parts of the story after the fact.  This marked the beginning of a storytelling device I’ve been referring to as a Third-Person Narrative, which basically consists of the blow-by-blow of the whole event, told from the perspective of an omniscient narrator, which contextualized the whole affair, and brought together all of the disparate mediums we used in telling the tale, live-action videos, Twitter, etc.  To see what I mean, click here for a Third-Person Narration of the our first real-life ARG on the “Fury of Solace” site.

This Third-Person Narrative device went on to become a staple of the entire series, not just the ARG recaps.  Because at a certain point, we realized that we were going to have to find a way to guide viewers through the story we were telling.  For instance, one of our characters called Uroboros is the proprietor of conspiracy blog called “The Flashlight.”  Now, when I set out to create character blogs for the series, I had two mandates.  One, I wanted to back-date entries to make it seem like the blogs existed before they actually did, before the show officially began.  The second thing I wanted to do with these blogs was to include some entries that weren’t necessarily plot pertinent, to give the illusion that these characters are real people, leading lives that don’t always revolve around the core story we’re trying to tell.  Now, admittedly, in the case of “The Flashlight,” we may have gone a bit overboard.  At the present time, that blog has about 80 entries, back-dated 4 years.  Now, we certainly don’t expect the casual viewer to read all of those blogs.  Hell, even particularly avid viewers probably won’t delve that deeply.  But there are plot-pertinent blogs peppered amongst all of that flotsam and jetsam, and the trick becomes, how do we direct viewers to read those blogs, when they’re buried amidst all of this other noise?  Our answer at the moment is this Third-Person Narrative device.  So now, each of our videos are accompanied by a Third-Person Narrative, some of which act like footnotes that link to relevant supplementary content, like blog posts, Twitter conversations, etc.

Next up, the play-by-play of our second Comic-Con based event, introducing Maxwell Glick’s character Uroboros.