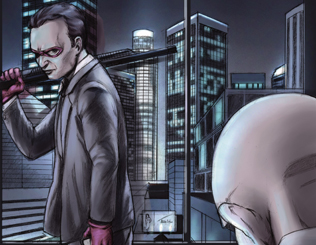 When I created the three-minute video that was to become the pilot episode for my web series “Fury of Solace,” I knew I had a larger story to tell with the character, but I didn’t know when or if I would ever get the chance to tell it.  That first video was actually a contest entry for the “Dr. Horrible” DVD release.  Joss Whedon’s three-part, web-based superhero musical starred Neil Patrick Harris as the title character, a supervillain hell-bent on gaining admittance to a group called the Evil League of Evil.  At Comic-Con in 2008, at the “Dr. Horrible” panel, Whedon and co. unofficially announced the contest: fans were invited to create villains of their own, and shoot a three-minute video application to the Evil League of Evil.  The best entries would be features on the “Dr. Horrible” DVD, which was scheduled for release in December of that year.

I pulled together a terrific team of collaborators to produce what became the first episode of “Fury of Solace,” and promoted our contest entry far and wide.  We received great accolades amongst the “Dr. Horrible” fandom (garnering a few mentions on Whedon’s official Fan Site Whedonesque), and though we weren’t ultimately singled out for inclusion on the DVD, the glowing response we received made me realize that the “Fury of Solace” journey couldn’t end there.

Since we didn’t even know for sure that “Fury of Solace” was going to be a series at the outset, the immersive transmedia experience and the ARG elements didn’t come until later.  First came the Twitter accounts.  Obviously, the first one out of the gate was the account for the title character, Fury of Solace.  Now, it occurred to me at the time that in a perfect world, there would be a twitter account for the character, and a twitter account for the show, and never the twain shall meet.  Because nothing breaks the fourth wall more than your character saying “check out our new episode!”  But at the time, I resigned myself to combining those two functions into one account: the thought being that I couldn’t guarantee that everyone who followed one account would follow the other, and it seemed more efficient for everyone to follow the one account that would be a one-stop shop.  Now, in recent years, web series like “The Lizzie Bennet Diaries” have had some success keeping a strict division between the Twitter accounts that exist in the world of the show and the official series account, but for the time being, I’m sticking to our original model.

There are a lot of cool things about creating a social media presence for your characters.  First of all, the level of audience involvement it facilitates is unprecedented.  Since “Fury of Solace” is a superhero musical, no one is under any illusion that these characters actually exist, but on a regular basis for the past several years, thousands of people have enjoyed pretending that they are.  Also, these social media profiles are great for character development: we’re taught that the attention span of the average internet-video viewer is all but nil, so conventional wisdom for web video has always been the shorter the better, and sometimes that means being brutally efficient with the content we’re conveying in the live-action episodes.  We don’t always have the luxury that hour-television dramas enjoy to explore character in our actual episodes, so giving those characters lives outside of the show, using blogs, vlogs and Twitter accounts, makes that part of our job that much easier.  More than that, the social media profiles can actually be used to tell a story!  And this is where I’ll finally segue into the origins of “Fury of Solace’s” first ARG.

I made a decision early on that “Fury of Solace” was not going to live in live-action only.  This was due in large part to the involvement of my friend Evaun Wallington, who came onto the project at the very beginning.  Evaun designed the look for our two lead characters, the now-iconic series logo, and helped me out in countless other ways along the way.  Evaun is a phenomenal artist, and an aspiring comic book illustrator, so it seemed to me that part of the “Fury of Solace” tale needed to be told via online comics.  It is a superhero story, after all, so I didn’t want to stray too far from the medium that spawned the genre.  Plus, there were aspects of the story that we were simply never going to be able to afford to shoot on an indie-web-series budget, so making some of the installments comics freed us up to tell whatever story we wanted.

I won’t pretend however that I wasn’t a little bit unsure whether or not our fans would latch onto this format, only because I’d never seen it done quite this way before.  We’re all accustomed to comic books being adapted to movies and vice versa, but it’s rare (if not entirely unprecedented) that a narrative switches back and forth between the two, some episodes told in live action, some told in comics.  Our second episode was slated to be an 8-page online comic, and before that was ultimately released, I wanted to make sure that the transition from our first live-action episode to our first comic book installment was as seamless as possible.  So I came up with an idea: To explain it, I’m going to have to give you a barebones description of the show and its characters (for a more detailed look, hop on over to www.furyofsolace.com).  Fury of Solace is a supervillain terrorist who targets corrupt politicians and corporate moguls for extermination.  There to thwart him at every turn is the superhero called the Orphan, who holds all life sacred and can’t condone Solace’s murderous ways.  Solace’s current target is Max Mason, president and CEO of pharmaceutical giant Mason International.  Episode two, our first 8-page comic, tells the story of the Orphan foiling Solace’s latest plot to assassinate Max Mason.  Solace had taken Mason captive in his corporate headquarters and rigged the building to explode.  But the Orphan showed up in time to save the evil CEO’s bacon.  But how did the Orphan know to show up in time?  That’s where our first ARG comes in.

First off, we produced a “Fury of Solace” video not unlike the typical terrorist ransom video.  We tied the actor who plays Max Mason to a chair, and had a silhouetted Fury of Solace deliver a diatribe about why Max Mason deserved to die.  Then, we posted the video to the website, protected behind a password.  The Orphan then proceeded to entreat her Twitter followers to help her uncover the password, so she could learn of Fury of Solace’s latest plot and put a stop to it.  And to my delight, our social-media savvy fans played along and ultimately did solve the puzzle!

The Orphan promptly thanked her followers for helping with the password, and, upon watching the video and learning that Solace was holed up with Mason on the penthouse of Mason Tower, she rushed to save the day.  And the successful completion of our first ARG triggered the release of Episode 2, the online comic which told the story of what happened when the Orphan arrived.  The narrative of our first Twitter ARG is chronicled here on the Fury of Solace site.

This whole exercise was tremendously fulfilling to us as creators, and proved to us that the audience would be willing to accept this storytelling format.  Additionally, the Fury of Solace terror video was our first in-world video, and as the show developed, videos like that, which ostensibly exist within the world of the show, would become a very important part of our storytelling repertoire.

Stay tuned for next week’s entry, when we delve into our first attempt to kick things up a notch with a real-world ARG.