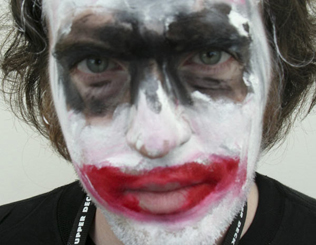 Back when I was a staff writer at Comic Book Resources, part of my job involved making the comic con circuit.  At San Diego Comic-Con back in 2007, I was dispatched by my editor to follow up on a Joker recruitment drive that was to take place across the street from the convention center.  What followed was an ingenious Alternate Reality Game, a city-wide scavenger hunt consisting of dozens of Jokers, a marketing push for the forthcoming film “The Dark Knight.”  I believe I was the only reporter to become “embedded” with the Joker mob, and I chronicled the experience for CBR here:

I won’t rehash the play-by-play here (check out the CBR article for those details), but there are plenty of other things I can reflect back on, now that I’m several years removed.  Even at the time, it struck me that they were holding this ARG a full calendar year before “The Dark Knight” was planned to be released.  And one of the things I really liked about the event was that there was a story to it, albeit a simple one.  The idea was that the Joker would recruit one of the mob of faux-Jokers to “die” in his place, to get the cops off the real Joker’s back.  I also liked that it wasn’t only about the journey, there were rewards, both for the participants and the world at large.  Everyone who took part received a replica mask of one of the Joker’s henchman from the opening scene of the film.  And the successful completion of the scavenger hunt triggered the release of a new official “Dark Knight” trailer.  Of course, the trailer was going to be released whether we completed the ARG or not, but even the illusion of that reward was a sufficient payoff.

And the “Dark Knight” ARG didn’t end there.  Over the course of the next year, I kept tabs on the Why So Serious campaign, which was really quite impressive.  On a certain day, certain Domino’s Pizza’s in certain cities were transformed into Gotham Pizza’s, and the lucky fans who found them first received a Batman cowl for their trouble.  On another occasion, certain bakeries masqueraded as Gotham City bakeries, where fans could receive cakes with a plastic bag of “evidence” baked inside.  And all along the way, fans continued to be rewarded for taking part in the campaign:  At one point, I found myself in a theater full of fans who got to see the opening bank heist scene from “The Dark Knight” in its entirety before anyone else.

Now, the fact is, “The Dark Knight” was going to be a smash hit whether Warner Bros. commissioned this ARG or not.  And at the time, only an already-established franchise like “Batman” would have had the resources to mount an ARG marketing campaign as extensive as this one.  How viable is this for small budget films, and even smaller-budget web series?  And exactly how much did the “Dark Knight” ARG affect the studio’s bottom line when it came to ticket sales?  The answers to these questions remain to be seen.  But I can say this for absolute certain: fans fortunate enough to take part in these events will remember them forever, and you just can’t buy that level of engagement.

When I designed the first Twitter-based ARG for my transmedia web series “Fury of Solace,” I took some of these lessons to heart.  More on that in my next entry.