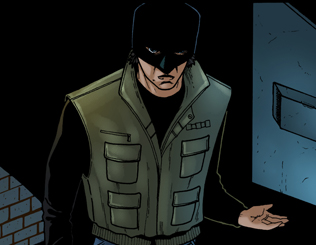 Many of the characters in my web series “Fury of Solace” have evolved along the lines of what I like to call the Cantina Effect.  We all know that when George Lucas shot the infamous “Star Wars” Mos Eisely Cantina scene back in 1977, he did not have names and exhaustive back stories for every single random alien in that bar.  But all of those characters are certainly fully fleshed-out in the here and now.  Likewise, when I created Max Mason for Episode 2 of the series, he was only supposed to be a one-off, Lex-Luthor-esque villain archetype, to pit Fury of Solace and the Orphan’s moralities against each other.  Needless to say, Max Mason quickly evolved to become the central villain of season 1.

The character of Uroboros comes from similarly modest origins.  When the “Fury of Solace” writing staff was conceiving of the story for what would become episode 5, we wanted to have a “low-rent villain” crash a Mason International event.  That low-rent villain became Uroboros, the character who now has a written blog with more than 90 entries, and by the end of our most recent cycle of videos will have had more individual screen time than any other character.

This actually gave way to an interesting narrative experiment.  In a perfect world, where I had countless writers at my disposal and endless resources with which to pay them, I would assign each member of our ensemble cast to one particular writer.  That writer would write all of the character’s blogs, the character’s Tweets, etc.  That would free me up to handle all of my other writing and producing duties, and ensure that the characters had a unified social media voice.  So, for a while at least, I assigned the Uroboros character to the immeasurably-talented writing team of Josh and Juliana Weiss-Roessler.  The pair wrote untold dozens of blog posts, all of the Uroboros vlogs, and the script for episode 5 which features Uroboros prominently.  Ultimately, as production dragged on, some of the blog-writing duties had to be farmed out to other writers, but the core of the character was handled by one unified voice, which turned out to be very cool, and very beneficial.  Hopefully I get the opportunity to try that again as the series continues.

As Uroboros grew more and more prominent, it became increasingly apparent to me and my Co-EP Matt Hartman that his first vlog was a little bit too out of the blue.  He just showed up, talking at the camera, and it would have been asking a lot of the audience to drop them into the deep end like that.  So we conceived of another Comic-Con event to provide what would hopefully be a more satisfactory introduction to the character, so he’d be better established by the time we released his first vlog.  This Comic-Con event wasn’t an ARG per se, it didn’t really give fans the opportunity to directly participate outside of bearing witness to what was happening on Twitter, it was just a story event we happened to stage at Comic-Con in 2010.  For one thing, we wanted to explain why this conspiracy blogger was wearing a home-made superhero mask, because this was not addressed in any of the material we had previously produced.  Now, we had already established during the 2009 Comic-Con ARG that Mason International had allegedly been interviewing potential superhero bodyguards at Comic-Con that year.  So for the first time in the history of our series, we employed the age-old comic book staple of the retcon.  Retcon is short for retroactive continuity, and I’ll be publishing an entire post dedicated to that idea next week, but for now, suffice to say that we had the crazy idea to shoot some material with Uroboros at Comic-Con 2010 and present that material in such a way as if it had been happening concurrently with the material we shot at Comic-Con 2009.

So that’s exactly what we did.  So while Fury of Solace was accosting Sara Ward at a seafood restaurant across from the San Diego convention center, Uroboros donned a home-made mask in an attempt to infiltrate Mason International’s superhero recruitment drive.  Confusing?  Absolutely.  Why was it a necessary evil?  For the answer to that, stay tuned for the next entry!